The Blow Off From a Man: Are You Being Played For a Fool 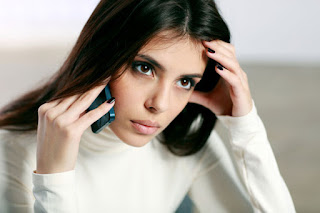 Q.  I’ve been seeing a guy for a few months. He has only given me his cellular number. That is the only way I can reach him. While I on the other hand have given him my cellular number, work number and home number. I have also cooked him dinner at my house. I have never been to his house. When I ask him about these things he gets real defensive. I think he’s married how should I proceed?
A. By slowing your pace. That’s a simple answer. I can’t say it’s a bad thing that he hasn’t given you his phone number or had you over to his house. Also it's important to remember in this day and age that many people only have cell phones and no home phone. My response is more for you to take a look at yourself. I think women need to respond in kind. If you’re given a cell number that’s all you give. We have a tendency to expose too much before it’s time. Maybe he doesn’t want you to know too much about him until he’s decided you’re someone he wants to make a lasting commitment with. Could he be married? Yeah. Just ensure that your steps in your relationship mirror his, except of course premarital sex. He has a right to remain secretive until he feels it's right.
It is prudent on your end to stop having men to your house and exposing everything you have until you both have exposed your true intentions. If you’re seeking a more permanent relationship then it is prudent for you to spend time with someone who is looking for the same thing. Always remember when a man finds a wife he finds a good thing. Let the man pursue and you wait to be found.
﻿
Email ThisBlogThis!Share to TwitterShare to FacebookShare to Pinterest
Labels: Blog, Foolish Relationships, Men, Relationships