Women Judging other Women Harshly! What’s up with that? There comes a time in every woman's life when she has to take a close look at herself. Not at her circumstance, not at what she did, not how unfair life is or not at who made you do it. She has to just look at herself in all her glory and imperfection.

For many women this is a scary thing because often times they don't want to know the truth about themselves. Virtuous women know what I mean. As women, we have a tendency to water one another down. Maybe it makes us feel good or look better than the next woman. Or maybe we just don't know how to tell that woman how we admire her. In reality we really need to look at ourselves and the pain we project towards other women.

Have you ever admired a woman who has been through changes in her life?  Or have you made up in your mind that she is just messed up. Before you make this mistake, take a closer look. A woman who has endured the most unusual life is someone of wisdom, someone who has been chosen by God to go through things that have made her stronger.


Think of all the great women in the bible, Mary Magdalene, Ruth and Naomi, the woman with an issue of blood flow, and Esther, to name a few. Mary was a prostitute, a very uneasy woman. But by the time Jesus was done with her, she was His closest follower.


Esther’s life began with the unfortunate loss of family and the deep experience of loneliness. By the time God was done with her, she had married one of the wealthiest men in the land.
Have you ever admired the strength of a single mother? Or have you made up your mind that it's too bad she had children on her own. A single mother knows no bounds when it comes to her children. She is strong and durable. Single mothers are strong, not because she has to be, but because it comes naturally for her to protect the extensions of her very being. Her love for her children is like that of fuel to a car. Most mothers keep their tanks full because they understand that if it runs low you could jeopardize the car and have problems in the long run. Other women only fill it when it is needed. Their cars usually break down.


Have you ever wondered why some women are not approachable? Or have you made up your mind that she is just mean. A quiet woman is a smart woman. She is valuable. She doesn't go off half-cocked and she won't be the one to argue with you over nothing. She just may even let you go on "setting her straight" and politely back out without a fight. She doesn't let many in her world. After all, she has probably been through the fire and had to rebuild. So why let just anyone in? This is usually the woman that only has "small talk" and knows her place, which is away from all the unnecessary things in life.


Have you ever wondered why that woman is so loud? Well, hey she has a lot to say. These are usually our younger women who have to learn restraint. They are eager and unsettled. They do before they think, and they do not think before they talk. They just go. 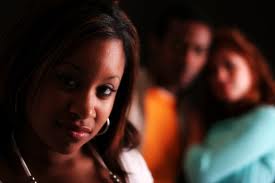 
Women are so quick to beat the next one down instead of trying to hold her up. Before you wonder, "What's up with her?" ask yourself, "What's up with me?" Why do I beat down another woman to build myself up? That woman could be my mother, sister, aunt, in-law, stepmother, niece, grandmother, great-grandmother, neighbor, friend, co-worker, etc. That woman could just be me.


Women are the carriers of life, not the channels of death. Let's build and encourage each other as did Ruth and Naomi. Encourage and Love, Forgive and Forget, and begin trusting and appreciating the women around you.
Email ThisBlogThis!Share to TwitterShare to FacebookShare to Pinterest